I’ve been set a challenge by the lovely Colleen over at Silver Threading. Those of you who know me well, will know I can never resist a challenge, and though I was going to begin tomorrow, I just received the best news and wanted to share it.

But I’m getting ahead of myself. Here are the rules of the challenge.

Post a photo each day for five consecutive days, and tell a story about each photo.  The story can be truth or fiction, poetry or prose.  Each day one must also nominate a fellow blogger to participate in the challenge. 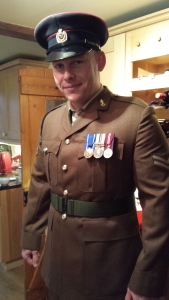 Which brings me to my news – my brother was just made Sergeant today, and I am absolutely over the moon! I’m so proud of him, I’m practically bursting. And, fair warning, I’m about to get extremely sentimental.

I’ve talked about Andrew before, and how close we are. We have the same sense of humour and, like two peas from the same pod, we enjoy the same things. Our dad would be proud of him, and I really wish he could be here to share the joy. Our grandfather too, who I remember beaming like the sun at Andrew’s passing-out parade!

In a lot of ways, Andrew reminds me of our dad; his height, his strength of character, the deep rumbling voice. There are differences, of course. Andrew doesn’t have dad’s shy, unassuming personality – my brother is a people person. He gets along with almost anyone he meets, partly because of his nature, his humour and sense of adventure, but mainly because he has a huge heart.

But let’s pull this back a bit, because I also wanted to talk about how Andrew has influenced my writing. When I began researching for the close protection team I write about, most of whom are ex-military, a lot of my material came from Andrew. When I write a scene I talk it over with him, and our discussions over the years are reflected in the team dynamic.

I recently agreed to name a character after him, and Andrew Butcher was born. He gets Butch for short, which is actually my brother’s nickname too, though for different reasons. I’ve warned him that the character is nothing like him personally. If I had to choose, I would say Andrew is closest in nature to Justin Chambers – he’s the joker; the one the team rely on. He annoys the hell out of Jonathan Jukes (JJ from Hands of Evil).

As I’m writing this, my brother is probably in the Mess getting drunk and celebrating his achievement. But he deserves it, and when he’s come down from his own high – I’ll be sure to tell him that a million times!

Thanks for indulging me!

I would like to nominate Alex Hurst, who always shares the most exquisite photographs.