I’d like to welcome back Scott Keen to Writing Room 101 today. Scott kindly agreed to answer a few questions. I thoroughly enjoyed the opportunity to get to know Scott better; his background, writing techniques, and current projects. I’m certain you will too.

Can you tell us a little about yourself?

I graduated with a Master of Fine Arts in Script & Screenwriting back in 2006. Currently, I am a stay-at-home dad of four daughters, ages 2, 4, 7, and 10. I homeschool my two older girls, and just play blocks and baby dolls with the little ones.

How did you choose the genre you write in?

Frankly, I write in the genre that I found the most interesting, which is fantasy. I didn’t necessarily set out to write a “young adult” book. It’s just that some of my characters happened to be teenagers, and with marketing, you must categorize it. I find YA books more appealing sometimes because of the lack of cynicism and interesting and innovative world-building.

What is your first memory of writing?

When I was younger, if I called my brother or sister a name, my parents would make me write lines as punishment. That was the earliest form of writing I can truly remember.

How did you come up with the title?

The title was originally called Child of the Downers. Child was the name of my main character. Through the editing process, however, I changed the name of Child to Crik, who was actually a character I used to have in the story. The original character of Crik was written out, and I took his name.

What are you working on right now? Tell us your latest news.

I have two books that I’m currently working on. One, called The Cry of Kilhaven, is finished, and I’ve put it aside before I go back and start editing it. It follows a young man who lives in an idyllic village in the middle of a post-apocalyptic world. He finds himself involved in a mystery that could shatter everything around him.

The other book is the 2nd novel in the Downer series. The working title is called Rise of the Branded (or Rise of the Downers). Not sure which one yet. This sequel will follow the main characters from Scar of the Downers, and some of the creatures that were more side characters in the first book will play a more prominent role. What I can say about this book is that you see more of the world outside of Ungstah in which the Downers used to live.

I’m also working on a musical that I plan on putting up locally. I have a portion of the script and two songs completed, so we’ll see where that goes.

Don’t give up! If you want to write, you are going to have to ignore a lot of people’s whispers. And frankly, you may find you are your own worst enemy.

The reason people are successful in life is because they didn’t give up. In my opinion, perseverance has always trumped talent. You always have to keep going, keep pressing on. As soon as you stop, you fail.

Do you start with character or plot?

I usually start with plot, or at least a situation, and then I build from there. Sometimes I have a clear idea who I want the character to be, while other times, I discover the character’s true personality as I write and as the character makes their decisions.

Do you use an outline or just write?

When I begin writing, I usually form some type of outline, but it’s typically brief. I just wrote the first version of Scar of the Downers with no outline. I made it up as I wrote with no real plan or idea where I was going.  Writing like that, however, forced me to do extreme editing. It took a long time.

For book two, I just wrote out the major points for the plots and subplots. That way, I have room for something to “spontaneously” grow as I write, while still having a map for the storyline. Sometimes, I will just write out a brief step outline, hitting all the major points I want to hit. It really just depends on the story and how much I’ve developed it in my mind before I actually put pen to paper (or fingers to keyboard).

In your words, what defines a good story?

While there are many ideas out there about what makes a story great, in my opinion, it all centers on plot. You can have the most unique voice, the strongest character, the best writing, but if you don’t have an interesting plot, you don’t have a story. Dull voice and characters are far easier for me to tolerate. But if the plot is stagnant or all over the place it is difficult for me to get into the story.

What book are you reading now?

Currently, I am reading The Night Eternal by Chuck Hogan and Guillermo Del Toro, finishing up The Strain series. After that, I plan on reading The Enemy by Charlie Higson.

I have a special treat for you today, a guest post by Scott Keen, author of Scar of the Downers. I have included information about his novel at the bottom of the post so you can learn more about the work.

A few years ago, I went to a writer’s conference where one of the speakers said that he advised his students to learn scriptwriting before novel writing. I think that his reasoning for this is because in script writing you have to focus on the bare bones of a story. In it, you find its skeletal structure. I would add to that reasoning this: You also have to show the action rather than tell your audience about it. Screenplays are completely visual. I think in some ways, novelists can have a tendency to have less action and more exposition, both of which are the death knell of a good screenplay.

In a typical screenplay, you start with the basic three-act structure (of course there are exceptions to this. Some would say most Hollywood scripts follow a four or five-act structure.) I would challenge you to watch a movie and see if you can point out some of the following structural points:

Knowing the structure of the screenplay is the framing of the house. If you want to build a house, you have to know how to frame it. There’s nothing worse than reading a book and realize that there’s no story to it. It’s a series of events with no discernible direction or connection with one another. While some people may like that type of story, I find it rather hard to get through.

There is more rigidity in screenplay writing, which can be both good and bad. It’s bad if you want to tell a bigger story than you can fit in a typical length movie. In a screenplay, any description only tells what you want the audience to see. In some ways you can paint a more vivid, detailed, and wider picture in a novel. Think of the depth of the world in the Lord of the Rings books that you could never get in the movies. On the other hand, doesn’t everyone want to see that scene with Gandalf coming down the hill at the end of The Two Towers? That’s why the director is considered the artistic force behind a movie. He or she gives flesh to what the writer wrote.

After all, that is the sole purpose of a screenplay: to be made into a movie. The purpose of a novel is to be read – the author is the director, using words to paint a picture. You have to take that into consideration when you have a story that you want to tell. If you have a story with the grandeur and breadth of Star Wars and you have no connections in Hollywood, it’s a better idea to write that as a novel. You have a much better chance of it getting noticed. I can write about far off planets or about the neighbor next door. The words alone can take you wherever you want to go. I’m not bound by money or technology. It is the reader’s imagination that provides the visuals, and with that, there’s a sense of freedom.

So, learning to write a screenplay can be a good discipline for a novelist. In my opinion, having a strong plot and telling a story well is paramount to character, style, voice, etc. Writing a screenplay will force you to focus on that aspect of storytelling.

As the director Sam Mendes once said, “I think movies are a director’s medium in the end. Theater is the actor’s medium.” I would add that novels are a writer’s medium. And that is why I, as a writer, am so drawn to it.

Scott Keen grew up in Black River, NY, the youngest of three children. While in law school, he realized he didn’t want to be a lawyer. So he did the practical thing–he became a writer. Now, many years later with an MFA in script and screenwriting, he is married with four daughters, two of whom he homeschools. He blogs at www.scottkeenbooks.com.

About Scar of the Downers: 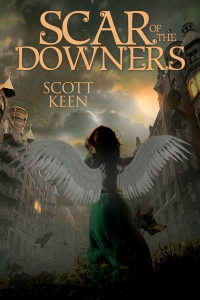 Branded on the slaves in the Northern Reaches beyond Ungstah, the scar marks each one as a Downer. It is who they are. There is no escaping this world. Still, strange things are stirring.

Two foreigners ride through the Northern Reaches on a secret mission. An unknown cloaked figure wanders the streets of the dark city of Ungstah. What they want no one can be sure, but it all centers around a Downer named Crik.

Crik, too scared to seek freedom, spends his days working in his master’s store, avoiding the spirit-eating Ash Kings while scavenging food for himself and his best friend, Jak. Until he steals from the wrong person. When Jak is sold to satisfy the debt, Crik burns down his master’s house and is sentenced to death.

To survive, Crik and his friends must leave behind their life of slavery to do what no other Downer has ever done before–escape from the city of Ungstah.

I would like to thank Scott for sharing his experience with us, and for agreeing to be a guest on the blog. I’m sure he would be thrilled to answer any questions you have.