Introducing Born In A Treacherous Time by Jacqui Murray

I am delighted to help Jacqui celebrate the release of her latest novel Born in a Treacherous Time. I would highly recommend visiting Jacqui’s post, where she has provided a schedule for the blog hop (here). You will find a lovely interview here, and a review of the book here.

I have my copy, and will provide a review within the next couple of weeks. I can’t wait to join Lucy and her band on their adventure!

Find out more about the book, including an excerpt, below. 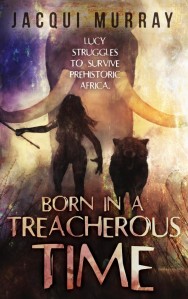 Born in the harsh world of East Africa 1.8 million years ago, where hunger, death, and predation are a normal part of daily life, Lucy and her band of early humans struggle to survive. It is a time in history when they are relentlessly annihilated by predators, nature, their own people, and the next iteration of man. To make it worse, Lucy’s band hates her. She is their leader’s new mate and they don’t understand her odd actions, don’t like her strange looks, and don’t trust her past. To survive, she cobbles together an unusual alliance with an orphaned child, a beleaguered protodog who’s lost his pack, and a man who was supposed to be dead.

Born in a Treacherous Time is prehistoric fiction written in the spirit of Jean Auel. Lucy is tenacious and inventive no matter the danger, unrelenting in her stubbornness to provide a future for her child, with a foresight you wouldn’t think existed in earliest man. You’ll close this book understanding why man not only survived our wild beginnings but thrived, ultimately to become who we are today.

This is a spin-off of To Hunt a Sub’s Lucy (the ancient female who mentored Kali Delamagente, the female protagonist).

“Murray’s lean prose is steeped in the characters’ brutal worldview, which lends a delightful otherness to the narration …The book’s plot is similar in key ways to other works in the genre, particularly Jean M. Auel’s The Clan of the Cave Bear. However, Murray weaves a taut, compelling narrative, building her story on timeless human concerns of survival, acceptance, and fear of the unknown. Even if readers have a general sense of where the plot is going, they’ll still find the specific twists and revelations to be highly entertaining throughout.

A well-executed tale of early man.”

“Born in a Treacherous Time sheds light on a period of time that gave birth to the human race, and allow us to bear witness to the harshness and tenacious spirit that is uniquely human—to survive and endure. Readers with a thirst for knowledge and who enjoy historical fiction, this is a must read. I am looking forward to reading book 2 when it is published.

“I devoured the book in 2 sittings.”

–Luciana Cavallaro, author of Servant of the Gods series and webmaster of Eternal Atlantis

Title and author: Born in a Treacherous Time

Series: Book 1 in the Man vs. Nature series

Jacqui Murray is the author of the popular Building a Midshipman, the story of her daughter’s journey from high school to United States Naval Academy, the Rowe-Delamagente thrillers, and the Man vs. Wild series. She is also the author of over a hundred books on integrating technology into education, adjunct professor of technology in education, webmaster for four blogs, an Amazon Vine Voice,  a columnist for TeachHUB, monthly contributor to Today’s Author, and a freelance journalist on tech ed topics. You can find her books at her publisher’s website, Structured Learning.

The scene replayed in Lucy’s mind, an endless loop haunting her days and nights. The clear sun-soaked field, the dying Mammoth, the hunters waiting hungrily for its last breath before scavenging the meat, tendons, internal organs, fat, and anything else consumable—food that would nourish the Group for a long time.

But something went horribly wrong. Krp blamed Lucy and soon, so too did Feq.

Why did Ghael stand up?  He had to know it would mean his death.

Lucy wanted to escape, go where no one knew what she’d done, but Feq would starve without her. He didn’t know how to hunt, couldn’t even tolerate the sight of blood. For him, she stayed, hunting, scavenging, and outwitting predators, exhausting herself in a hopeless effort to feed the remaining Group members. But one after another, they fell to Snarling-dog, Panther, Long-tooth Cat, Megantereon, and a litany of other predators. When the strangers arrived, Feq let them take her.

By this time, Lucy felt numb, as much from the death of her Group as the loss of Garv. Garv, her forever pairmate, was as much a part of her as the lush forests, Sun’s warmth, and Snarling-dog’s guidance. Now, with all the other deaths, she could leave his memory behind.

Forests gave way to bushlands. The prickly stalks scratched her skin right through the thick fur that layered her arms and legs. The glare of Sun, stark and white without the jungle to soften it, blinded her. One step forward became another and another, into a timeless void where nothing mattered but the swish of feet, the hot breeze on her face, and her own musty scent.

Neither male—not the one who called himself Raza nor the one called Baad—had spoken to her since leaving. They didn’t tell her their destination and she didn’t ask, not that she could decipher their intricate hand gestures and odd body movements. She studied them as they talked to each other, slowly piecing together what the twist of a hand and the twitch of a head meant. She would understand it all by the time they reached wherever they headed.

It was clear they expected her to follow. No one traveled this wild land alone but her reasons for joining them, submissively, had nothing to do with fear. Wherever the strangers took her would be better than where she’d been.

Lucy usually loved running through the mosaic of grass and forest that bled one into another. Today, instead of joy, she felt worry for her future and relief that her past was past. She effortlessly matched Raza’s tread, running in his steps at his pace. Baad did the same but not without a struggle. His sweat, an equal mix of old and stale from the long trip to find her and fresh from trying to keep up, blossomed into a ripe bouquet that wafted over her. She found comfort in knowing this strong, tough male traveled with her.

Vulture cawed overhead, eagerly anticipating a meal. From the size of his flock, the scavenge must be an adult Okapi or Giraffe. Even after the predator who claimed the kill—Lucy guessed it to be Megantereon or Snarling-dog—took what it needed, there would be plenty left. She often hunted with Vulture. It might find carrion first but she could drive it away by brandishing a branch and howling. While it circled overhead, awaiting a return to his meal, she grabbed what she wanted and escaped.

Feq must smell the blood but he had never been brave enough to chase Vulture away.  He would wait until the raptor finished, as well as Snarling-dog and whoever else showed up at the banquet, and then take what remained which wouldn’t be enough to live on.

Sun descended toward the horizon as they entered a dense thicket. They stuck to a narrow lightly-used animal trail bordered by heavy-trunked trees. Cousin Chimp scuffled as he brachiated through the understory, no doubt upset by the intruders. Only once, when a brightly-colored snake slithered across her path, did Lucy hesitate. The vibrant colors always meant deadly venom and she didn’t carry the right herbs to counter the poison. Baad grumbled when her thud reverberated out of sync with Raza’s, and Cousin Chimp cried a warning.

Finally, they broke free of the shadows and flew through waist-high grass, past trees laden with fruit, and around the termite mound where Cousin Chimp would gorge on white grubs—if Cheetah wasn’t sleeping on top of it.

I haven’t been back here since that day…

She flicked her eyes to the spot where her life had changed. Everything looked so calm, painted in vibrant colors scented with a heady mix of grass, water, and carrion. A family of Hipparion raised their heads but found nothing menacing so turned back to their banquet of new buds.

As though nothing happened…

Lucy sprinted. Her vision blurred and her head throbbed as she raced flat out, desperate to outdistance the memories. Her legs churned, arms pumped, and her feet sprang off the hard earth. Each step propelled her farther away. Her breathing heaved in rhythm with her steps. The sack around her neck smacked comfortingly against her body. Her sweat left a potent scent trail any predator could follow but Lucy didn’t care.