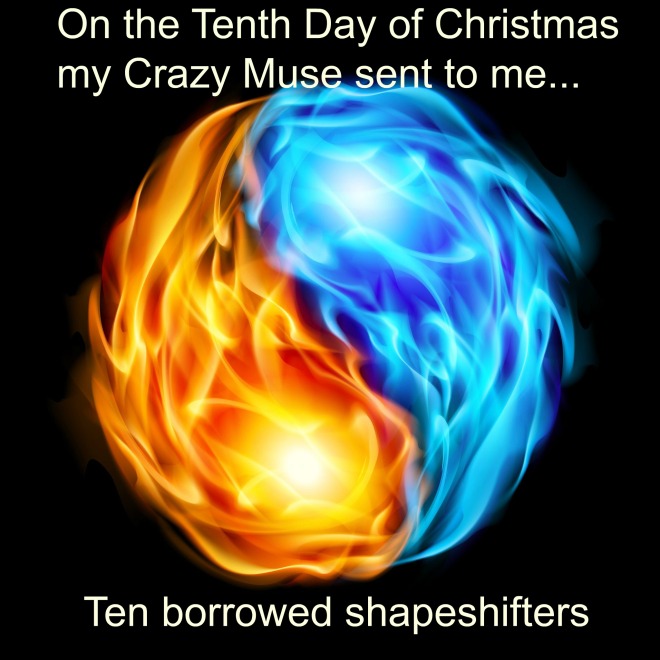 Welcome back to the twelve days of Christmas, fantasy style. So far, we’ve had a god with a secret, two changeling cats, three fearless hunters, four lightning birds, five gold rings, sixe members of the Battalion, seven of the Elite, eight greedy goblins, and nine brave soldiers. If you’re just joining the story, a small estate within the mortal realm has collapsed. All twelve days relate to the rescue effort.

On the Tenth Day of Christmas my Crazy muse sent to me…Ten borrowed Shapeshifters.

It’s a little crazy, this one. I think I have Christmas fever or something 😉

Maddison worked a cloaking spell as she slipped into the large tent assigned to the hympe family. She felt a moment of unease for spying on them. The feeling evaporated when she spotted their visitor.

For a moment, she fought the urge to drop her cloak and berate him for slipping into the site unannounced. But she had a feeling that wouldn’t go down too well. He was the Hympe King after all.

They had never met, not officially, yet she recognised him at once. It was his air of dominance, the way it filled the space. The way he filled the space, with his wide shoulders and long limbs. Tobias Locke, like all hympes, had a haunting kind of beauty. He kept his dark ebony hair long, which strangely fit with his regal appearance, and those damn shirts he wore. Made from the finest silk, they should have looked ridiculous on his large frame. They didn’t.

Backing up, she left the group to their privacy. In her haste, she forgot to drop the spell, and she was glad of it when she collided with one of Tobias’ guards. She knew Marcus, and she didn’t like him very much. The feeling was mutual. Since becoming one of Tobias’ three, his arrogance was off the charts.

“Is that you, witch?” he asked, his voice mocking.

He didn’t answer right away; his gaze was fixed on her suit. She was used to that. Yes, so the elves had gifted her with a uniform, get over it already. “Are you finished ogling?” she asked, and barely held back a laugh when his eyes jerked up.

“Why are you sneaking around?” he demanded.

“Not that it’s any of your business, since you didn’t announce your presence on a secure site, but I’m trying to find a way to make our guests more comfortable.” She sighed, thinking of the Mizon family.

They still knew so little about the group. Jacob, the patriarch, along with his wife and siblings, had found a way to serve their contract in the Hympe Trials together. It wasn’t the only unique thing about them. Jacob had eight siblings, which was rare in their community. Hympe parents tended to avoid big families because they knew what fate awaited them.

“They’re scared, hurting, and waiting for the other shoe to drop, so that might be a tall order,” Marcus said, but his tone held less bite than usual.

“Other shoe to drop?”

“They think they’ll be shipped back to the asshole who bound them for another century.” His lips tipped up. “Tobias is breaking the news that he took care of that little problem.”

Little problem? He called a powerful sorcerer with ties to the Fractured a little problem. Maybe she could grow to like Marcus after all. “How did he manage that?”

That didn’t tell her anything, but it was the only answer she was going to get. “Okay, so they’ll soon have something to celebrate. How can we integrate them into the community? They barely eat, hell, they barely even sleep.”

“Why do you care?” he asked, narrowing his eyes.

“Because she knows how it feels to be a prisoner in this war,” said a deep commanding voice behind her.

Maddison turned and came face to face with Tobias Locke.

Shit, should she bow or something? She never felt this intimidated, but with his probing blue eyes and overwhelming presence, she felt trapped.

“Since you were eavesdropping, why don’t you tell us your opinion on the subject?” There went her mouth. She just couldn’t help herself.

Tobias laughed, and even that was appealing. “As a matter of fact.” He flicked a glance to Marcus, then back to her. “The Mizons would like to express their gratitude to their rescuers, and haven’t been able to visit with them since they arrived.”

In fairness, the troop hadn’t been up to visitors. They were all in the makeshift infirmary, and were still in bad shape. “That can be arranged,” she said, bowing her head slightly. See she could show respect. “In fact, there’s a custom in the mortal realm, which suits the time of year. How would they feel about entertaining the troops?”

“No. She might be on to something.” Tobias turned slightly, his expression considering. “They’re shapeshifters. What better way to make them feel welcome than to have a little fun?”

Maddison had to agree. If there was ever a time for laughter it was now, and her playful side had kicked into overdrive since hanging around with the damn cat. Blade would eat this up.

She turned to Marcus. “Don’t you have a thing for old black and white movies?”

The growl he gave her rivalled Logan’s. “So, what? You want us to act out the Wizard of Oz.”

“Perfect,” she said, letting her laughter free. “You could be one of the flying monkeys.” Winking at him, she turned back to Tobias. This time her bow was more pronounced. “Your majesty. It’s been a pleasure.”

He smiled. “Before we leave, you must tell me how you know Marcus. I have a feeling that’s a fun story.”

He ignored her, well, except for the glare.

“I’ll look forward to it.” Tobias looked to his guard. “Marcus, do you want to share your excellent idea with the Mizons? There might even be a little role play involved.”

Maddison couldn’t help but smile as she walked away, heading to Blade’s tent. If there was one thing her new friend would appreciate, it was a roomful of shape shifters putting on a show.