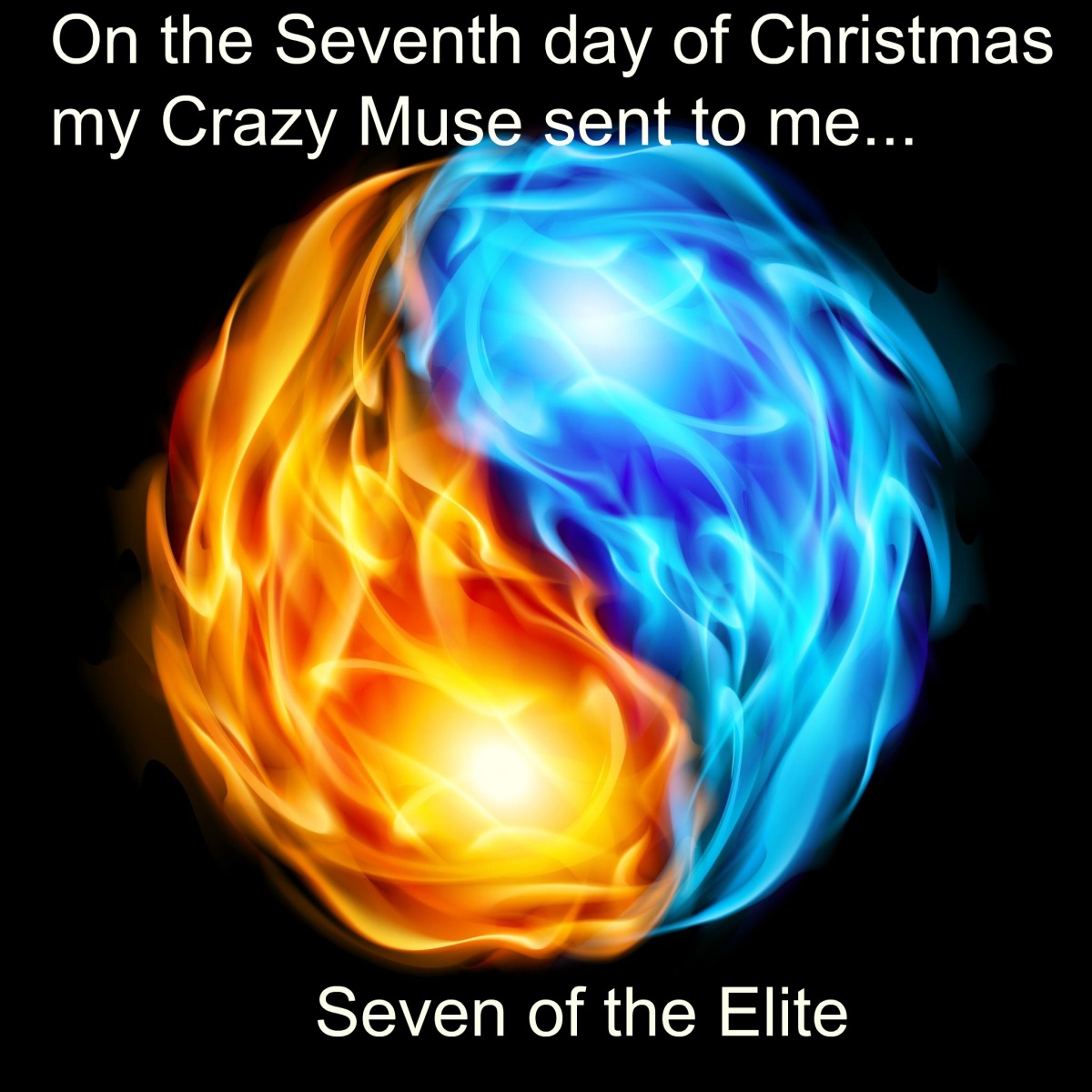 Welcome back to the twelve days of Christmas, fantasy style. So far, we’ve had a god with a secret, two changeling cats, three fearless hunters, four lightning birds, five gold rings, and six members of the Battalion. If you’re just joining the story, a small estate within the mortal realm has collapsed. All twelve days relate to the rescue effort.

On the Seventh Day of Christmas my Crazy Muse sent to me…Seven of the Elite.

It took every stubborn cell in his body, but Logan managed to stand in place. He didn’t roll his shoulders, didn’t pace or growl when Blade smirked from the front row. The soldiers crowded into the large tent were looking to him to make decision.

“Hilmore is the perfect place to relocate a community of this size,” Riley pointed out. His cousin was lounging against a table; a strategic placement because it put him beside the food. “It’s an established safe zone.”

“I agree, despite the logistical nightmare of transporting all the wounded. But the community have lost enough. They want to stay, so we need to revise the plan.”

“If I may make a suggestion,” a lyrical voice spoke up from the back.

Logan’s attention snapped to the last row, where the elves crowded together, conferring quietly. They were the relief team, seven members of the Elite who had arrived an hour before.

Apparently, Maddison Wood had friends in high places, because these soldiers had offered their services, even knowing the team they replaced were sleeping off their exhaustion. They had pumped so much power into the earth during the rescue effort, Logan swore he could feel the heat burning the soles of his feet.

“Go ahead,” he said, clearing the gruff from his throat.

“We took the assignment on behalf of the House of Gilliford. With the right help, we could transform the site.”

Logan had a feeling the right help meant one seriously sassy witch.

“Maddison is overseeing outer security, but we can pull her in,” Blade supplied helpfully.

“I suppose you’re volunteering to deliver the news?” Logan shook his head. His brother couldn’t resist getting his flirt on, but when he was in full on avoidance mode, his cat was lethal.

I live to serve.

Logan rolled his eyes. You live to goof off. Get out of here.

Blade rose to his feet. “It’s hell being the fastest one in the room,” he said aloud, wiggling his brows in Zachariah’s direction. “But you know I always pull my weight.” He didn’t wait for a response. The soft whoosh of the tent flaps signalled his exit.

Scratch goofing off. The damn cat lived to torment him, and gloating was one of his favourite ways.

Don’t be a grouch. Blade’s voice in his head only proved his point. And keep me updated.

Relaxing now his brother wasn’t around to get under his skin, Logan met the expectant eyes of his team.

An hour later, he was standing at the edge of the site, his wolf at attention as he watched magic flow in every direction.

The team of elves, an Elite group of seven, were subtle in their use of power. They communed with the earth, manipulating its energies with heads bent and expressions pulled tight in concentration.

In contrast, Maddison Wood was standing in the midst of a storm. Her long, dark locks unravelled and flying around her as she worked with the team to rebuild what was broken.

They weren’t alone. Landon and Lochlan had taken to the sky, their own power a vibrant, sizzling current as it streamed down upon the emerging construction below.

I thought only the gods could wield that level of power.

Even in his head Blade’s voice held a ring of awed disbelief. Yeah. She’s no ordinary witch. That’s for sure. He studied her. The elfin suit, the unmistakable glow of her power that shone a midnight blue through the strands of her hair. Maybe she’s part elf. Why else would her energy blend so seamlessly with theirs?

Beats me. But thank the gods that it does. It’s been a while since I saw anything that cool, man.

Logan didn’t know about cool. The earth was white hot. They’d had to move back several feet to avoid the burn. But he had to admit he was impressed. As the group worked together, several structures began to form; the bricks and mortar bending to their will.

Those structures looked nothing like the houses that had once stood in their place, and yet the aesthetic beauty was undeniable. Not only that, the houses blended with the environment, as though the earth now shaped them. A gift to the community who would thrive once more.

Perhaps the most spectacular thing, was the effect the power surge had on the trees and shrubbery littering the site. In the centre, a sapling that had been crushed under the weight of a falling building now stood erect and tall.

Logan remained in place until the group completed their task. He only moved when Maddison teetered on her feet, but Zachariah got there before him. He caught her, slinging an arm around her shoulders and leading her towards a nearby tent.

He was just about to follow when he heard Riley call his name.

“We have a problem,” his cousin said, though his eyes were following Maddison and Zachariah’s progress.

“What kind of problem?”

Riley turned back to him. “We just received a distress signal. A squad about a mile out.”

They began to head back to the command centre. “Do you want to take a team? “

“I thought we could head out together.” Riley smirked. “You’re looking a little tense there, boss. A little action might be just what you need.”

Logan laughed. He was right. His wolf needed out. Needed to run, to feel free for a while. But then Riley knew all about that. “Sounds good to me.” He nodded. “Let’s go.”