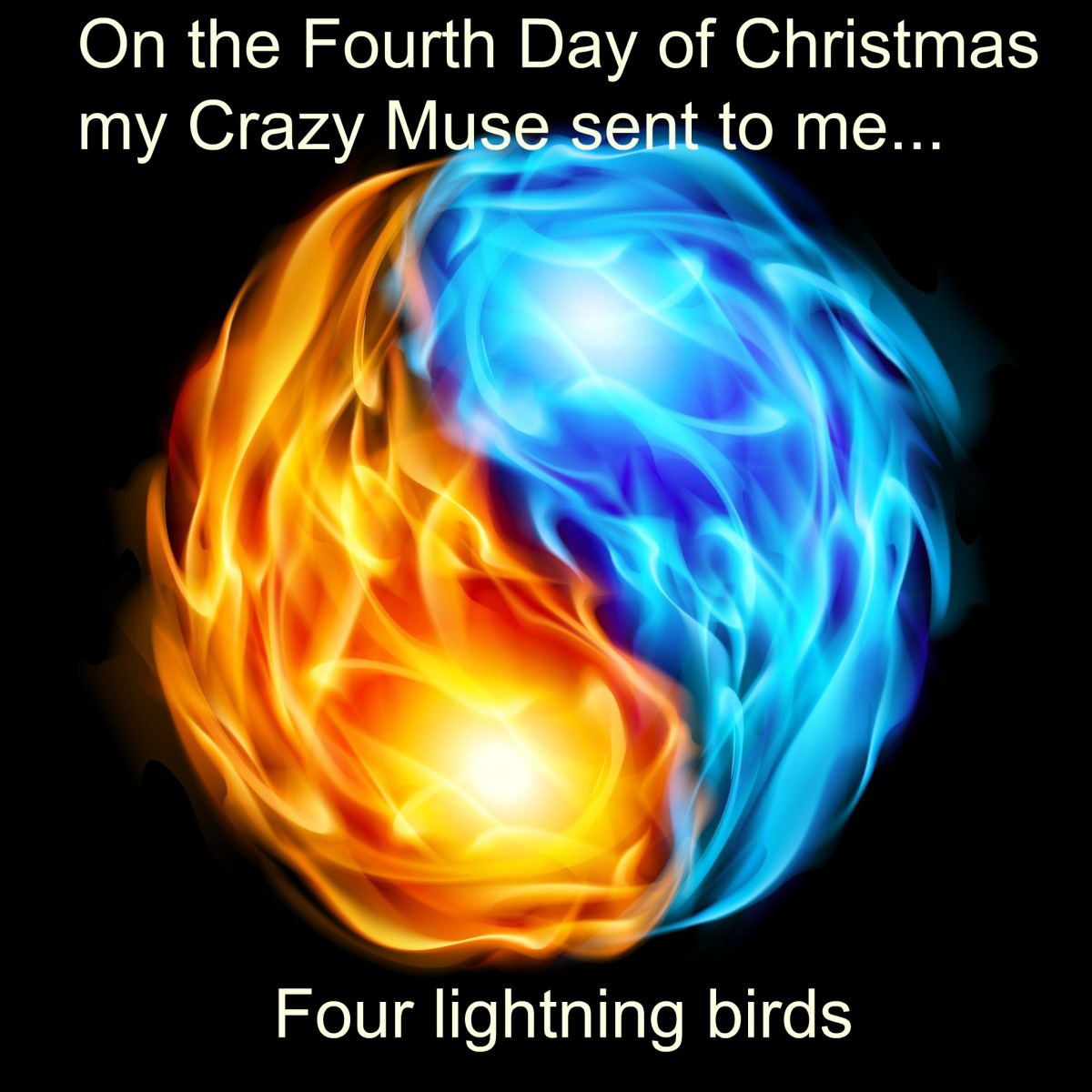 Welcome back to the twelve days of Christmas, fantasy style. So far, we’ve had a god with a secret, two changeling cats, and a hunter or three. If you’re just joining the story, a small estate within the mortal realm has collapsed. All twelve days relate to the rescue effort.

On the Fourth Day of Christmas my Crazy Muse sent to me…Four lightning birds.

A sizzle of kinetic energy lit up every nerve ending in Blade’s body. It was followed by a booming crack, a whip of sound and colour across the sky.

“You have got to be shitting me,” Blade said, depositing an unconscious woman onto a nearby stretcher.

Alayah followed his gaze, her breath hitching when she spotted them. Two lighting birds, their vibrant red feathers like a flame glowing in the night.

“Somehow, I don’t think that’s what Lo meant when he said we needed light on the situation,” she said.

Blade grinned, despite the crap storm above them. “Hey, you never know. They could be friendly.”

She snorted, and it was one of the sweetest sounds he’d ever heard. Yep, he was pathetic. But it meant she was comfortable with him again. That their friendship wasn’t a lost cause.

Those thoughts vanished when a bolt of lightning hit the ground in front of him.

Blade turned to see Maddison jogging over to them. “We need to deflect those blasts away from the danger zones. And it appears they’re attracted to you.”

“I’m not sure I can outrun lightning. Why do I have to be target practice?” He would do it, he just liked messing with her. It probably had something to do with the fact his cat had a major crush, and she took his harmless flirtation in her stride.

He frowned, glancing Maddison’s way when she didn’t rise to the bait. She had her eyes closed, her head dipped to the side as though concentrating on something she couldn’t quite hear.

Blade studied her, his gaze dropping to her right hand. It took him a second to understand that the subtle movement of her fingers coincided with the increase in air current. What started as a gentle breeze became a gust of wind that made his hair dance and the dust swirl at his feet. She was creating a distraction.

Tipping back his head, Blade watched the lightning birds circle overhead. They seemed amused by her. Curious even.

“Can’t you guys like…woo them or something?” he asked, smirking when he felt Maddison’s gaze on him.

“If that’s a crack about witches using lightning birds as pets, I’m going to pin you to a lamp post and colour you a sacrifice.”

“Kinky,” he purred, wiggling his brows.

“I wonder if they have a thing for honey.”

Blade looked at Alayah, thrilled when he saw the light of amusement in her eyes. It felt better than the powerful energy crackling in the sky.

“That sounds like an interesting story, and I want to hear all about it,” Maddison said, interrupting. “But now would be a good time to let the cat out. We need a distraction so the others can start moving the injured.”

Blade shifted without another word, his good humour disappearing along with his human skin.

There was a small park bordering the housing estate, so he headed that way – hoping to draw the birds away. It worked. Though Maddison probably helped them along. He felt the blast of air like a hard caress along his fur.

For the next ten minutes, Blade zipped from one end of the park to the other as blast after blast of lightning mapped his progress. His fur got singed a few times, but his cat was enjoying the chase. At least until he took a hit. The burning pain along his right side was enough to slow him down.

His words were punctuated by a crack-crack-sizzle. That couldn’t be good.

Blade glanced to his right, following the fiery snap of sound and saw two more of the damn birds, their feathers intertwined with blue. How the hell was he supposed to dodge four of the fuckers?

Drawing in a deep lungful of air, he prepared to bolt as a stream of power tore across the sky in a breath-taking display of dominance. He would have been toast for sure, if they had aimed that power at him. Instead the newcomers were aiming at the two using him for target practice.

He dropped to the ground, shifting as he did so he could lay on his back. The new pair were friendly, perhaps one of Orion’s countermeasures.

The birds went at each other with everything they had. A no holds barred assault that lit the sky like a fierce, fiery storm.

“Go team Orion,” he murmured and tucked his hands behind his head, content to watch the show.