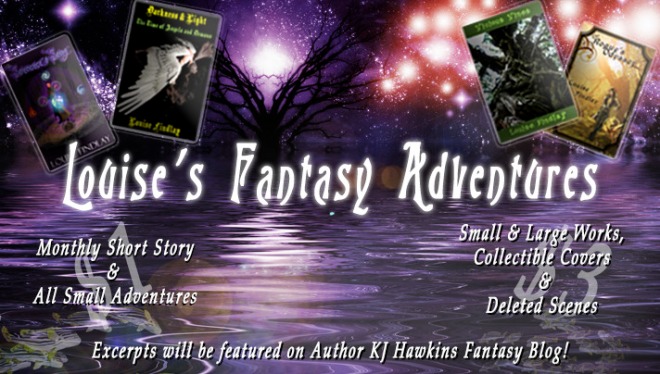 One of my writing friends, Louise Findlay, recently released a short story, Imprisoning a Duel Discord. Click here for more details. It is my great pleasure to be able to share a sneak preview with you today.

The world is in musical order. To maintain balance, a team of Government Agents, named Harmony, track down, experiment on and sometimes kill those who express the music of dissonance. Those like Psycha, a duel Discord of Vyla and Sios; a prime lab rat to Harmony.

Being able to disrupt harmony by voice and hands alone makes Psycha far more dangerous than the usual Discord. Will she run into trouble trying to protect her boyfriend, Caleb? Will her desire to destroy Harmony prove fatal for her? What will be left of her if she ever gets captured?

What had Caleb gotten himself into this time? We were discords for music’s sake. We couldn’t strike back against Harmony if we ran, and be damned if he got caught. He was a Tara Discord not a Vyla like me. He was more vulnerable and I knew for a fact he left his Tara back at camp. Careless. That was so unlike him. He was usually methodical and paranoid. He couldn’t afford to throw his life away on a whim. I was the reckless one.

I hummed a tune to try and find his wavelength. Discords stuck out like a sore thumb, and he was a Tara. He was invisible without it, but I knew his musical signature like the back of my hand. I was almost certain I could pick something up, and I did. The three note discordant hum that was uniquely Caleb was faintly ringing in the air. I rushed to try and catch up to him. There was no way he would get captured on my watch. Cinder would kill me.

No. I caught sight of a man with the Harmony symbol on the back of his black suit. The tell-tale sign of a sharp, with two notes at the bottom and a treble clef in the middle, made him the enemy. I’d seen what happened to Discords when Harmony got a hold of them. They were mere husks of their former selves; dead and despondent inside. Their life cruelly ripped away. I would not let that happen to Caleb.

I screamed out notes at the man’s back, notes which clashed horribly. It was music to me, but the assailant recoiled, clutching his head in pain. How dare he try and take away the thing that made Caleb who he was. Being Discords defined us.

My enemy retaliated by taking out his Ko and trying to play me into submission. The harmony was excruciating to me. I was a duel Vyla/Sios Discord. Normal Discords were three parts discord and one-part harmony. I was fully Discord. I could control music with my voice and by touch alone. I hated Harmony for what they did to us, and I knew I’d be their prime lab rat.

I was bombarding him with musical assaults, but I had to be careful not to hit Caleb. He was powerless without his Tara. Why did he not bring it with him?

Ah. Blood ran down my cheek when a note hit. Harmony and dissonance were opposites. One could hurt the other. Harmony were the government and Dissonance were the outcasts. I would make them pay for condemning us to a lifetime of running. Harmony agents lived to capture us.

“Go, you idiot. Get back to camp. You’re defenceless,” I ordered.

At last, he managed to see sense and fled. I couldn’t protect him if he was in the way. I waved a shield to protect against the agent’s next attack. Now Caleb was safe I could really let loose without fear of hurting him. I used my voice and hands in tandem to unleash a barrage of musical weapons at him. Streams of note swords and arrows flew at the enemy. He was pretty quick to keep up with me, but he couldn’t deflect everything I threw at him.

I started to hum a dissonant melody designed to sweep into his soul. I would poison his harmony with dissonance. He let out a hiss, which told me I was successful. I screamed as more musical implements of doom attacked me. I used the blood trickling down my arm in a note. Blood notes packed a mean punch. Judging by the look on his face, it did.

“Bring it, Discord cur,” he replied.

I screamed like a banshee. When he was distracted, I flung a spear at him. I turned his cries into a gag with a wave of my hand. His voice was grating to my ears.

Ah. A melody hit me straight in the neck and continued to constrain my throat. I tried to catch my breath, but it was impossible. I flailed around, trying to swipe him off me, but to no avail. I couldn’t let him get me. I couldn’t be captured. I finally managed to get him to relent, but my vision turned hazy as I gasped for breath.

Louise Findlay writes fantasy (general short stories) and inspirational poetry. She enjoys reading and writing about mythological creatures, such as angels and demons, but has a soft spot for vampires. Louise is currently in the midst of writing a vampire novella about two vampire clans whose deputy’s clash in a big way, entitled A Spy in the Sagax Vampires.

She general writes ebooks, but she is a part of a few anthologies which are in print, and is working on a special secret project this year.

One thought on “Imprisoning a Dual Discord by Louise Findlay”