Review: Cadence of Consequences: The Chronicles of Xannia Series (Book 2) by M.J. Moores

I had the pleasure of reading Cadence of Consequences early, given that I was lucky enough to beta read the second novel in The Chronicles of Xannia series. To be completely honest, after reading the first, I jumped at the chance. You can read my review of Time’s Tempest here.

So, before I share my review of this great adventure, here’s a little more about the book itself. 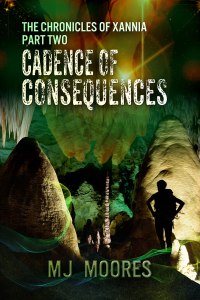 She risks losing her life above-ground, in the city she loves, and for what? Possibly harming the innocent if she remains hidden below…

Trapped in a foreign Underground world, Taya battles inner demons and alienation as the man she promised to protect… to love… remains firmly planted in the government’s cross-hairs; hell bent on fulfilling his destiny to change the world. Constantly accosted by a fanatic sect of the Followers of Light, praising her as a false goddess in a religion she never truly believed in, Taya searches for something to return a sense of meaning and purpose in her life. As her skepticism for the impending coup grows so too does Gerrund’s lack of trust, undermining not only her sense of self-worth but their ability to overthrow a corrupt government.

Even as Taya desperately works to establish a communication network spanning the Deserts in an effort to keep a promise she never should have made, her past interferes causing any sense of the future to spiral out of control. It is up to Taya to fix herself and her fractured relationships in order to embrace her destiny and help two very different men attempt to alter the course of history.

In the first book of the series we were introduced to Xannia, and got a real feel for this new and exciting world. We joined Taya on an epic adventure as she led Dezmind and a group of his followers across the Deserts. We saw Taya use her expertise as a guide to keep the group alive, and learned the origins of Dezmind’s prophecy. These revelations led to a different fight for survival and culminated in an explosive finale – one which made Taya a target.

In Cadence of Consequences we journey with Taya below ground. Separated from Dezmind, lost and determined to return to her duties topside, Taya faces a multitude of challenges. This chapter in the series packs an emotional punch, which cements a reader’s loyalty to Taya and her friends. Not only does she suffer a crisis of identity, this sense of loss is exacerbated by a group of fanatics known as the Followers of Light. They plague Taya mercilessly, delaying her journey into a renewed sense of self.

Despite the turmoil, Taya’s true personality shines through and her skills are as admirable as ever. I particularly enjoyed the differing points of view within Cadence of Consequences; both the scenes in the Deserts, where a group remains, and of Dezmind’s own struggles in a changing world.

It is a story of unrest, fear and mistrust. But it is also a tale of love, discovery and Taya’s interminable strength. As a reader I was rooting for her. I’m drawn to the connection she has with Dezmind, and though the two are apart in this particular adventure, the author managed to show us the link they share in a variety of ways.

The pacing of the story is one which allows a reader to settle in and appreciate the journey. It’s a definite page turner, a book you’ll find hard to put down. As with the first in the series, Cadence of Consequences is a rollercoaster ride, and it is one which will stay with you. I can’t wait to join Taya and Dezmind for their next adventure. 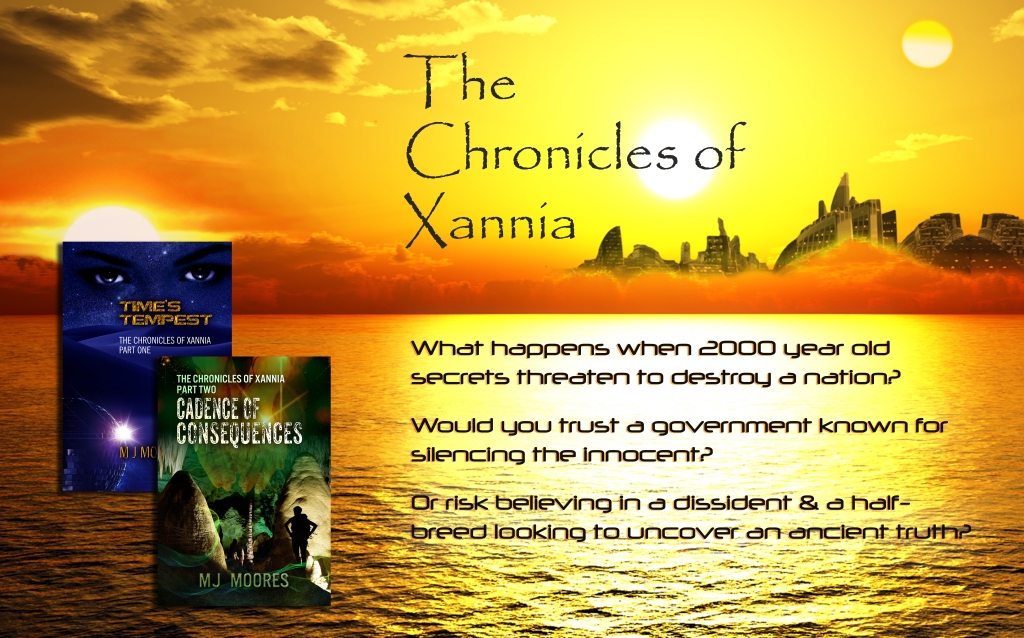 I float under a clear lid, in a sealed grey metal box filled with red-tinged water. Holding my breath, wanting desperately to feel the pain of my marks release, but my gills refuse to open. I heave my body around in circles as the metallic cuffs rip into the tender flesh of my wrists and ankles. A thick, muffled, tick-tick-tick ebbs through the water. I try kicking out with my bound feet to free myself. My heart pounds in my ears, even as the ticking echoes through my brain. My lungs burn.

A faint pin-point of light flashes somewhere above me. Help me! I scream in my mind. My neck goes limp; my chin drifts to my chest. Help me – Four bubbles of air escape from my nose. The light disappears as the metal walls push in toward me…

Gasping for air, I jerked backwards. The island stool fell away and I smacked my head on the edge of the breakfast bar as I crashed to the floor, cracking my hip against the stone floor.

I opened my eyes, but they refused to adjust; the room remained black. Grasping at the smooth floor, I pulled myself forward on my stomach until the glow from the timer on the coffee pot became visible through the pulsating ache above my right eye. My chest constricted against my lungs before I managed another gasp, taking in oceans of air. Great sobs wracked my over-taxed body. In the pool of dim light illuminating the kitchen floor, I curled into a ball and wept.

That feeling of helplessness and confinement clung to my skin like cobwebs. The nightmares were evolving and coming more often now. What hurt even more was the reminder of Gerrund’s words after leaving me alone in my new apartment for the first time: They found you once, they’ll find you again. No amount of body art is going to change that. They know you.

He’d claimed that the Kronik’s Special Agents evolved from the CTF just as I had. That my employer’s knowledge of my actions, reactions, body language and vocal patterns made me easy prey in the wrong company.

Being abducted and tortured in the Warehouse showed that I wasn’t invincible after all… that maybe Gerrund and Dez had a point about it being safer for me to remain Underground – but the only things this cage reinforced were failure and susceptibility to the whims of others. The truth serum had been in my veins… if Gerrund’s team hadn’t saved me, could I have held out against it?

Sitting on the cold floor, against the half-wall of the kitchen island, I leaned my head back as the last remnants of tears dried in salty streaks along my cheeks. I sat there, in the dark, afraid to move and ignite an electric shock-wave in my head. My arms hung limp beside me, my legs at odd angles on the floor, as my breath came in shallow, uneven wisps.

I had no idea how long I’d been there. It was obviously still twilight, so I hadn’t slept for long – just long enough. The more time that passed, the steadier my breathing became. The longer I waited, the clearer my mind got; until a plan formed.

As my brain eagerly welcomed the onslaught of budding thoughts, the feeling slowely returned to my fingers and toes. This was what I was trained to do: identify the situation, analyse it, deconstruct it, and plan for the offensive.

I had to stop the dreams. If I didn’t, they’d kill me. I couldn’t go on like this. It’s time to get mobile again – gain some semblance of control. Reaching forward, I rested on my hands and knees before crawling into my bedroom.

I sat beside the nightstand with my back against the bed. Yanking the drawer out, I spilled the contents on the floor in front of me. My eyes finally adjusted to the dark. This simple function took three times longer than usual, and had never really worked since the nightmares started. My half-Talian abilities were rendered useless.

I sifted through the mess on the floor: pens, paper, a book, some loose hair clips, and a couple of small plastic containers… until my wrist bumped the empty bottle I searched for. 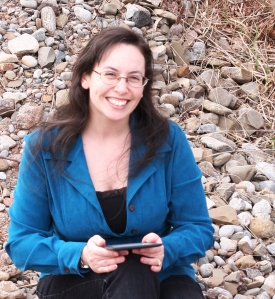 M.J. Moores began her career as an English teacher in Ontario, Canada. Her love of storytelling and passion for writing has stayed with her since the age of nine. M. J. relishes tales of adventure and journeys of self-realization. She enjoys writing in a variety of genres but speculative fiction remains her all time favourite. M.J. is a regular contributor to Authors Publish Magazine and she runs an Emerging Writers website called Infinite Pathways where she offers editing services and platform building opportunities. Her debut novel Time’s Tempest is currently available in print and e-book with Book 2 launching September 28th, 2015.

5 responses to “Review: Cadence of Consequences: The Chronicles of Xannia Series (Book 2) by M.J. Moores”