I’m delighted to welcome Amy M. Reade to Writing Room 101 today, author of Secrets of Hallstead House. Amy has shared an excerpt with us, which is really exciting. So read on to learn more about her latest release, and don’t forget to show Amy some love in the comments!

acy Stoddard had hoped to ease the grief of losing her parents in a fiery car crash by accepting a job as a private nurse to the wealthy and widowed Alexandria Hallstead. But her first sight of Summerplace is of a dark and forbidding home. She quickly finds its winding halls and shadowy rooms filled with secrets and suspicions. Alex seems happy to have Macy’s help, but others on the island, including Alex’s sinister servants and hostile relatives, are far less welcoming. Watching eyes, veiled threats…slowly, surely, the menacing spirit of Hallstead Island closes in around Macy. And she can only wonder if her story will become just one of the many secrets of Hallstead House…

My journey was almost over.

It was raining, and I looked out through the drizzle across the
blue-gray water of the Saint Lawrence River. Only a few boats were
out on such a raw and rainy day. From the bench where I sat on the
Cape Cartier public dock, I could see several islands. Each was covered
with trees—dark green pine trees and leafy maples, oaks,
birches, and weeping willows. In the chilly late September air, the
leaves were already tinged with the colors of fall: yellows, reds, oranges,
browns. I could glimpse homes on the islands, but I didn’t see
any people. It was beautiful here—so different from the city I had
just left behind.

Even though twenty years have come and gone since that day, I
can still remember the calm that settled around me as I waited for my
ride to Hallstead House in the middle of the Thousand Islands. My
nerves were still ragged, but the river had an immediate and peaceful
effect on me. I was only twenty then, but I had been through so much.
Though I had been traveling for just a few hours, my journey to this
place had begun six long weeks earlier.

As I listened to the raindrops plunk into the river, the sound of the
motor from an approaching boat cut into my reverie. It was an older
boat of gleaming mahogany with a large white awning covering most
of it, protecting the cabin and the pilot from the rain. It puttered up to
the dock slowly and in a few moments had pulled alongside, close to
where I sat. The pilot moved to the stern and climbed out quickly, securing
the boat to the dock with a thick rope. He turned to me with a
questioning look and said, “Macy Stoddard?”

He shook my hand curtly. “I’m Pete McHale. I work for Alexandria
Hallstead. She sent me here to pick you up. That all the luggage
you brought?”

He shot me a disapproving look and said, “I hope you brought
some warm stuff to wear. It starts getting cold up here pretty early in
the fall. It’s colder here than it is in the big city, you know.” He
smirked.

Determined to stay positive, I ignored his look of reproach and
replied that I had plenty of warm clothes. Once he’d stowed my two
large suitcases in the boat under the awning, he helped me on board,
where I chose a seat in the front so I could see where we were going
and stay dry. I had been in a boat once as a child when a furious storm
blew up, and I had hated boats ever since. Still, though I was unhappy
and nervous to be riding in one, there was absolutely no other way to
get to my island destination. Pete untied the boat and we slowly
pulled away from the dock. As he scanned the river and began turning
the boat to the north, I glanced at his profile. He looked like he was
in his mid-thirties—medium height, with light-brown, windblown
hair, and green eyes with creases in the corners that made it look like
he squinted a lot. He wore faded jeans and a Windbreaker.

When he had steered the boat out of the small, sheltered bay at
Cape Cartier and into the more open channel, he glanced at me and
said, “We’ll be at Summerplace in about ten minutes.”

“That’s the name of the house on Hallstead Island.”

“Oh. I thought it was called Hallstead House.”

“Its official name is Hallstead House. The people who live on the
island just call it Summerplace.”

We sat in silence for several moments, and finally I asked, “Why
is it called Summerplace?”

Pete sighed. Evidently he didn’t relish playing the role of tour
guide. “It’s called Summerplace because it used to be a summer retreat
for the Hallstead family. Now Miss Hallstead stays there for as
much of the year as she can. In early to mid-October she moves the
household over to Pine Island and spends the winter there.”

To keep my mind off my abject fear of being on the water, I turned
my attention to the islands we were passing. Each one had a home on
it, and all of the homes were beautiful. Some looked empty, since
their occupants had probably left after the summer ended, but some
still had boats tied to docks or housed in quaint boathouses. The
homes themselves, most of which were huge and had large, welcoming
porches, were surrounded by the ever-present trees. Several had
bright awnings over the windows.

In the face of Pete’s apparent ambivalence, I had determined not
to ask any more questions. But as I sat looking around me I forgot my
self-imposed rule. “Are there really a thousand islands in this area?”
I blurted out.

“There are actually over eighteen hundred islands in the Thousand
Islands,” he replied. To my surprise, he seemed to warm to this
subject and continued. “In order to be included in the count, an island
has to be above water three hundred and sixty-five days a year and
support at least two living trees.”

I continued to draw him out, asking, “What do you do for Mrs.
Hallstead?” 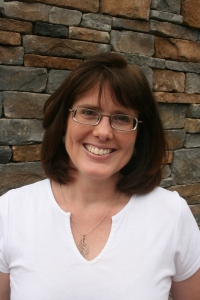 Amy M. Reade grew up in northern New York. After graduating from college and law school, she practiced law in New York City before moving to southern New Jersey, where she lives now with her husband, three children, dog, two cats, and a fish. She writes full time and is the author of Secrets of Hallstead House, a novel of romantic suspense set in the Thousand Islands region of New York, and The Ghosts of Peppernell Manor, a novel in the same genre set outside Charleston, South Carolina. She is currently working on her third and fourth novels, set in Hawaii and Cape May, New Jersey, respectively. She loves cooking, reading, and traveling.

Thanks for stopping by. Until next time.