This is the first of two posts focusing on P.S. Bartlett and her new release – Demons & Pearls. Later this afternoon I will be sharing an interview with you, but for now – here is information about the exciting new novel, which includes a sneak peak. Enjoy! 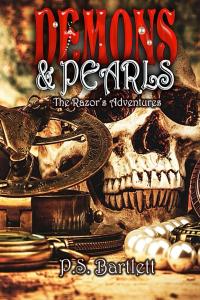 Blurb-
Had I known the repercussions of murdering the captain of a pirate ship, I may have taken the time necessary to rethink the act. As if I’ve ever had a choice that didn’t involve a fight or at the very least, defending myself against some man, hell bent on destroying me or my kin.
All we wanted was our freedom. All we found were demons disguised as men.
A woman pirate needs friends, big strong male friends, to survive in this unforgiving land of thieves and murderers—at least until she gets on her feet. Of course, trying to find one person you can trust is like finding an oyster with a perfect pearl in it—you have to break a few shells and get your hands dirty. We were lucky. I found the biggest, baddest and most honorable man in the Caribbean and he just happened to be in the pearl business.

Author Bio:
I was born on Valentine’s Day a long, long time ago in South Baltimore, Maryland, less than a mile from Fort McHenry and Federal Hill. I’m a very simple person. I love my life and am always striving to make it better for myself and my family.
I write, I draw and I still work full-time. I’ve been married for 20 years and together we have two sons, a daughter, three beautiful granddaughters and a ten year old Maine Coon cat named Columbus.

Caught in the middle of the Golden Age of Piracy, four young women, led by their eldest cousin, Ivory Shepard, have escaped a pirate raid and bought passage aboard a pirate ship to Port Royal, Jamaica.
With no more than their smarts and their will to carry them, they end up caught in a battle for their lives. They have been betrayed by the ship’s captain and unfortunately realize that as women, they are worse off in this new world than they were in the old one.

This is their story as told by Ivory Shepard, also known as…The Razor.

Chapter One
~No Quarter~

Had I known the repercussions of murdering the captain of a pirate ship, I may have taken the time necessary to rethink the act. However, as I stood over the bloody, lifeless body of Captain Christopher Barclay, as well as no less than seven of his crew, as usual it was too late to change my mind. Change my mind, indeed. As if I had a choice.

As if I’ve ever had a choice that didn’t involve a fight, or at the very least, defending myself against someone hell-bent on destroying me or my kin. I must always follow my instincts, regardless of the fallout of my actions. Had I not done so, I most certainly would not have lived to see the rest of this unspeakable day.

I pleaded with the Captain not to kill them all. If he’d have only been more of a man and less a murderous monster, perhaps this day may have ended for him as he lay down at last, safe and whole in his bunk. Alas, this was not to be. Instead, the surge of the battle within him overtook his senses, and he snatched me by the back of my neck.

“Miss Shepard, take your ladies below. And should these swabs be foolish enough to fight back, and God forbid we lose this fight, kill your cousins… and then yourself. Trust me, you’ll not wish to draw breath should that pack of dogs board us.”

“I’ll send them below, but I’ll not pass up the chance at last to show your own pack of dogs who I am.” What the hell was I thinking?

“It’s your pretty head. If the first sight of a sail dropped you to your knees, let’s hope you can stay on your feet when they bare their fangs and lunge at your throat.”

“I’ll live, Captain. And perhaps you haven’t noticed, but they’re not ladies anymore. Today shall prove that.” We’d spent weeks in rags, cleaning up after pirates, listening to their vile comments, and working as virtual slaves in order to secure our passage to Jamaica. I wondered constantly why we hadn’t been violated yet, but I held onto the hope that a pirate could in fact, keep his word.

Perhaps I’d had enough and was ready for a fight. Considering I had fallen to my knees when I heard the call of “Sail!” and had shaken like a leaf at the sight of these men scrambling about, loading guns and making preparations for a fight, one would have thought I’d have run and hidden with my cousins. But, no; as usual, I had something to prove.

“Such a shame to waste such charms. Look at you,” he said, taking me roughly by the jaw with his filthy paw, from which I jerked free instantly. “You’ve lost your youthful glow to the harsh wind and sun, and if you ever had a tender inch, you’ve buried it beneath the vines of bitterness you’ve wrapped yourself in. Tell me, Ivory, who did this to you? Who plucked the rose and left the thorns?”

“Those who would step over that gunnel will meet my blade before another unwanted and indecent hand breaches my striking distance. I’ll remove that hand and take his arm as well, and if that doesn’t stop him, his head.”

“Such a tragedy you are, and since I’ve my own tragic story to write, it’s time to give back to the world what she’s bestowed upon us, my dear. Ready the guns! Do not fire until I give the order! She’s no fucking good in a million pieces!” Barclay roared over our heads as he raced, broadsword in hand, to the stern and stood at her highest point.

“Shepard, get your skinny ass up here! You want to be free?”

“I will be free!” I shouted at him. There was no turning back now.

“Bring her around! We’ll rake her from the bow and then take her from the starboard side!” He barked to the helmsman. I’d never heard this voice before. It wasn’t a voice. It was the roar of a mighty lion, and the mere sound of it vibrated through my skin.

As his call to arms passed through me, a deafening hum pierced my brain and I sheathed my sword and cupped the sides of my head, in an attempt to silence it. When I let go, the only sound I heard was my own heartbeat, which I imagined was well over one hundred beats per minute. In the background, strangled beneath the thumping drumbeats that felt as if they were about to split my chest, were the thunderous cries of the crew. The muffled screams and fearsome bellows of men in search of blood and fortune were barely audible behind the wall of my excruciating terror.

I glanced up and over the side, watching as the panicked crew of our prey scrambled wildly about, dodging the incoming gunfire, obviously unprepared in both arms and numbers for such an assault. Unable to believe what I was seeing, I lowered my hands for a moment and swallowed hard. I watched in horror as the first man at the rail of our prize lost the left side of his skull in a spatter of bone and bloodied skin. The gun flew from his hands, and his feet left the deck simultaneously, sending him bouncing backwards out of this life and unnaturally into the next, as nothing more than a heap of dead flesh.

I think I screamed and then felt a pop deep within my eardrums. All at once, the echoes of deadly battle at last bashed their way in. Gunfire and the thumps and clinks of grappling hooks dropping to the deck in preparation to make capture were sharp, and what I could clearly see and hear was matched sight for sound at last.

“Fire!” Barclay ordered. All five guns kicked back with a deafening boom, shaking the Demon Sea. I lost my footing from the jolt and coughed hard repeatedly as gunpowder and choking smoke filled the air. As we came about to the starboard side of what was obviously no more than a merchant ship, the smoke cleared in the windy spray, and Barclay called to hold fire. I looked across the water to find all those left standing shoulder to shoulder on their deck. Their arms were raised and their meager weapons lay at their feet. The damage done by what I knew to be chain shot—Barclay’s preferred method of maximum devastation—left blood, flesh, and splintered wood as far as my eyes could see.

“Take her lads; she’s all ours!” Barclay shouted as he sheathed his sword and snatched me by the back of my neck again. “Look, girl! Do you see those twenty or so swabs with their tails tucked in their asses? I’m about to give the order of no quarter. Do you know what that means?”

“No quarter?” I asked, shaking free of his grip and pushing him off as I backed away in horror. “Why? They surrendered, and yet you’d…”

“That’s right, lass. Kill them all,” he growled with a smile.

“We’re about to take their living. What will they have to live for, once it’s ours?”

Barclay’s eyes shined, and at last I could see the monster he truly was. I pulled my sword and pointed it at him as I lowered my head and looked up into his cold, dead eyes. “Call them off. Take the loot and let the living go,” I commanded. Once again, I had no idea what I was thinking. This was none of my affair, and yet something in me couldn’t bear the thought of what he planned to do.

Barclay burst into laughter. “Hold your claws, little kitty, before I rip them out and feed you to the dogs!”

“We’ve been here before, remember? This time, I won’t stop when I pierce your yellow hide.”

“Oh, but you will,” Barclay said with a smooth purr. Then, a thick forearm clamped around my neck from behind and pulled me off my feet. I dropped my sword and dug my nails into my assailant’s hard flesh, and I kicked him again and again. The more I resisted, the more his grip tightened against my throat. The man twisted and turned, causing me to swing from the neck down like a clock’s pendulum. With a loud pop and a violent jerk, his arm pulled free, and I was sent flying hard against the boards, flat on my face and struggling for air.

Don’t forget to stop by this afternoon when I will be interviewing P.S. Bartlett.